The last few months have been absolutely amazing as we have headed into closing our primary videography for Chasing Atlantis. In October, we shot an amazing interview with Star Trek’s Rod Roddenberry, and more recently, through November and December, we “caught” Atlantis in her new home at the Kennedy Space Center as well as witnessed the historic launch of the Orion capsule.

Matt and Paul with Shuttle Atlantis in the Background

Ever since we were present for Atlantis’ roll-over from the Vehicle Assembly Building in 2012, we have been hoping to get some time with the Shuttle at the new facility designed to showcase Atlantis and celebrate the Space Shuttle’s legacy. There have been hurdles to get private time with a Shuttle. As an independent film which is considered “foreign” in the United States, it took nearly two years to get connected to the right people at the Kennedy Space Center. We were put in touch with Andrea Farmer and Sarah Hansen (Huge Thanks!) at the KSC who made it happen for us.  And there she was – Atlantis! We had three hours with the orbiter outside of public viewing time. Cathartic is the best way to describe the experience. Atlantis’ place in our film has evolved and changed so much over the three years and six months since we began our journey and this opportunity gave us time to reflect on that change. At first Atlantis was the journey. Now, I feel that the shuttle serves more as a symbol of journeying and exploration itself; some of that exploration being self-exploration. I’ve come to see that we weren’t really ever out to catch a Space Shuttle but rather were trying to understand our own need to see Atlantis’ final launch in the first place. Why did we have to go? That’s the question. Spending that time with Atlantis at the Kennedy Space Center was a fantastic bookend to our journey. Huge thanks as well to Jim Kennedy, former KSC director, for putting us in touch with Andrea Farmer, Senior Public Relations Manager, and to Margaret Lazarus Dean for giving us the idea to put it all together to begin with. Margaret is an author who writes on the space program. Check out her book “The Time it Takes to Fall” and her blog “The Time it Takes to Blog” 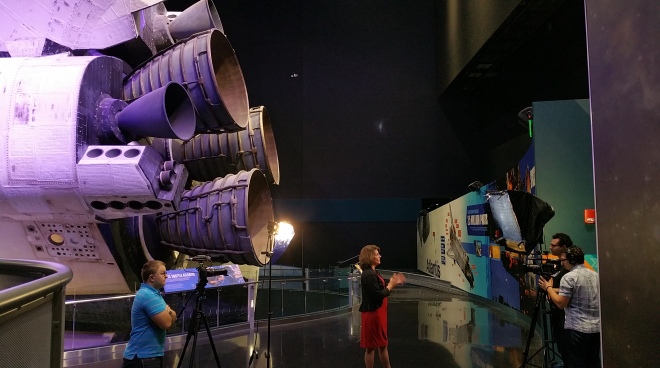 At Atlantis, we were joined by our friend Ryan Horan who works out at the Kennedy Space Center. Ryan was the very first contact we ever made when down to see Atlantis’ final flight in 2011. He tweeted the @chasingatlantis handle when we had it written in marker across the rear windshield of our rental car in Florida. Since that time Ryan arranged access for us at the Vehicle Assembly Building when Discovery was being dismantled, hosted us at his house with his wife Rachel each time we’re down, and keeps us in the loop with happenings in the space community. Ryan had yet to do an interview with us after all these years, so it was time to get him on camera with Atlantis as backdrop (below). Thank you Ryan and Rachel. Without your support, we would’ve never made it this far.

To get a final overview, literally, of the Kennedy Space Center, we were given an aerial perspective of the entire complex by local pilot Omar Izquierdo who also worked on the shuttle program and pursued his dream of becoming a pilot. Omar was introduced to us by Margaret (thanks again!) and took us on an incredible flight not only around the KSC, but on an approach of the actual flight path that the Shuttle uses to land at the Center when returning from space. Our gratitude to Omar for getting us up in the air! 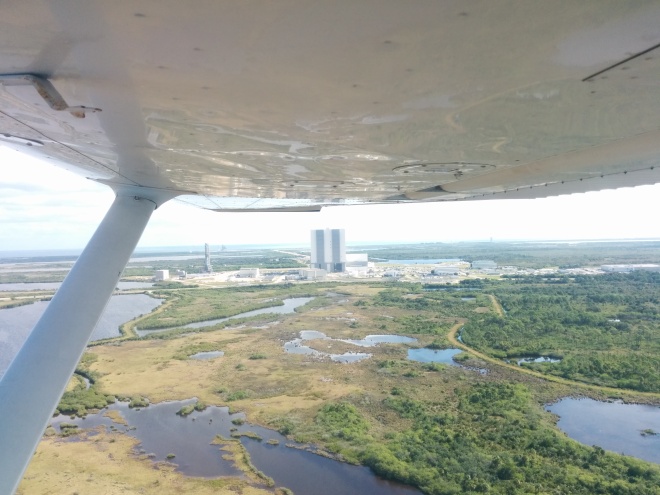 NASA Vehicle Assembly Building out the right side of the cockpit 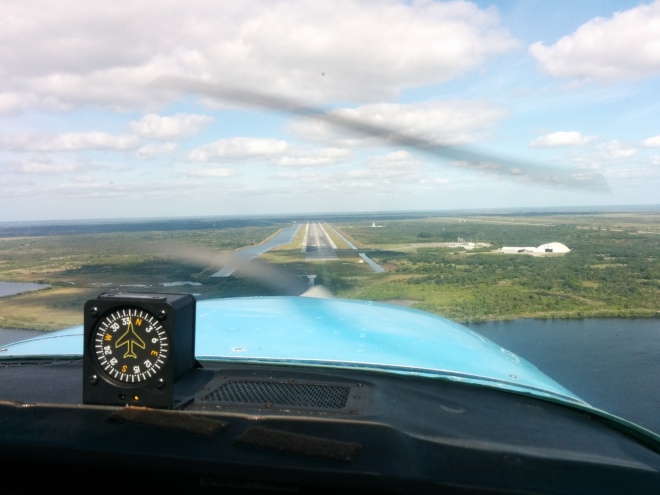 Approaching the Runway at the Kennedy Space Center

Our November trip also coincided with the dedication of a new monument to the Space Shuttle Program in Space View Park Titusville, Florida by the Space Walk Hall of Fame Museum. The museum has been a home for us over the years working on the film providing access to their staff, many of whom worked at the KSC for decades stretching back to the Apollo Moon landings. With an array of incredible artifacts we’ve captured on film, the museum has also served as a backdrop to explore the history of the space program. The Space Walk of Fame has recently moved to a new location – triple its original size. If you’re in the area, you should really check it out. The monument rests upon a marble slab with narrative and images from the Shuttle Program etched into it by a high power laser. The work is a testament not only to the astronauts, but the thousands of people who supported their journey to space. Big thanks to Charlie Mars and Karan Conklin for always letting us set up shop at the museum and keep everybody from going home at a decent time.

Lastly, in early December, I made it down to Florida once again for the Orion Launch. This was the first unmanned (unhumaned) test flight of the Orion capsule –  the new vehicle NASA will be using for human space exploration estimated to begin in 2018. While seeing Atlantis this past November was a bookend for our journey, Orion’s test flight was a foreshadowing of the next great historical mission that will once again bring humans to space from the Kennedy Space Center. The last human launch into space from Florida was the Atlantis launch in 2011 that began our journey. Once again, our thanks to Andrea and Sarah for the Orion media passes. Following the launch, Ryan and I hit up Grills Seafood Deck to watch the capsule return, successfully splashing down on Earth. First time I’ve been in a bar where the TVs were tuned to a space ship on re-entry through the atmosphere and a cheering audience when the parachutes opened.

Waiting anxiously for Orion’s Launch at the Kennedy Space Center

As I was typing this update, I realized it is comprised of a series of shoutouts. That wasn’t my intent when I sat down to write, but it does make sense. As Ryan and I were leaving Grills, I spoke to him of how much I look forward to seeing familiar faces on these film shoots now. We’ve made connections; which is what we had always hoped our project would accomplish. In this sense, the film, before being realised, has already become a success for me. Even more amazing is that some of these connections have begun to form on their own. Our other friend Ryan, Ryan Kobrick, Executive Director of Yuri’s Night, posted this photo below when he saw Abigail Harrison AKA Astronaut Abby, at the KSC wearing a Chasing Atlantis T-shirt. Both of them hadn’t met yet, but Ryan recognized the shirt and the two sent us this awesome pic. Totally made my day that through the film we had made a connection between two of our interviewees. Yay space family! We’ve made incredible friends, partnerships, and have become integrated into a community of space geeks across North America (maybe the world for those of you who read from abroad!) who all find a part of their humanity while looking up. Thank you to all of you who live, breath, write, create, fantasize about, and work in space, for accepting us into your fold. It is incredible to think that those of you who have touched the cosmos have greeted us – those making a movie about doing so – with such enthusiasm.

Carl Sagan’s prophetic quote outside of the Atlantis Facility

We’re on to editing now! Yay! (kindof) Be sure to stay tuned for updates, vids, and blogs!

May 2015 be filled with adventure, exploration, and friendship!